Inicio What to see DISTRICTS OF LEON CENTRAL LEON 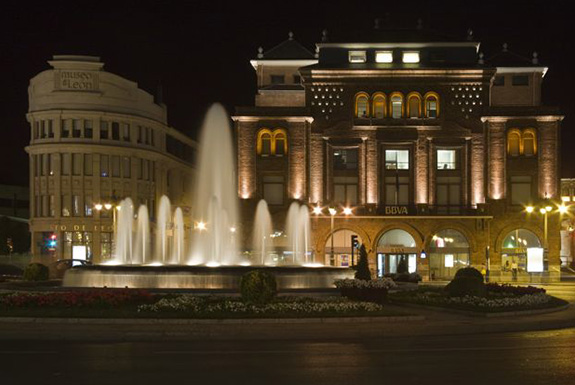 The approval of the project to enlarge the city in the early 20th century meant a number of modifications to the urban layout and design, and the middle classes of the city were quick to take advantage of the new plans. The first to do so moved to the new spaces, to family residences built on what is now the Calle Alcázar de Toledo and the Avenida Padre lsla. Now only two of them remain, one on the corner between San Agustín and Alcázar de Toledo and another between Ordoño II y Juan Lorenzo Segura.

Residential districts were then built, a process that soon became a constant feature of the city. A number of architects began to impose their style and vision, such as Juan Crisóstomo Torbado and Manuel de Cárdenas, the latter of whom was responsible for many buildings on corners marked by French influences in terms of domes, gables and attics, such as the Casa Lubén, Casa Ciriaco in Ordoño II and the Casa Goyo in Plaza Santo Domingo, amongst others, and for a large industrial building, Almacenes Pallarés, now home to the Museum of Leon. Juan C. Torbado, designed the Casa Alfageme on the corner of Ordoño ll and Alcázar de Toledo, and the building of Roma 18 on the corner of Cardenal Lorenzana.

New architects came into their own in the 20th century. Some were Leonese, such as Isidoro Sáenz Ezquerra, Francisco J. Sanz y Martinez, Luis Aparicio Guisasola, Ramón Cañas y del Rio, Juan Torbado, Prudencio Barrenechea and Felipe Moreno, while others came to the city just to work and leave their mark in the shape of unique buildings. These include Federico de Ugalde, architect of the Casa Roldán in the Plaza de Santo Domingo; Gustavo Fernández Balbuena who designed the Casino in the plaza of the same name; and José Maria de la Vega Semper, responsible for designing the first Telefónica building in the Avenida Padre lsla.

The Teatro Emperador, designed by Manuel and Gonzalo de Cárdenas and Francisco J. Sanz, was built in the first half of the 20th century.