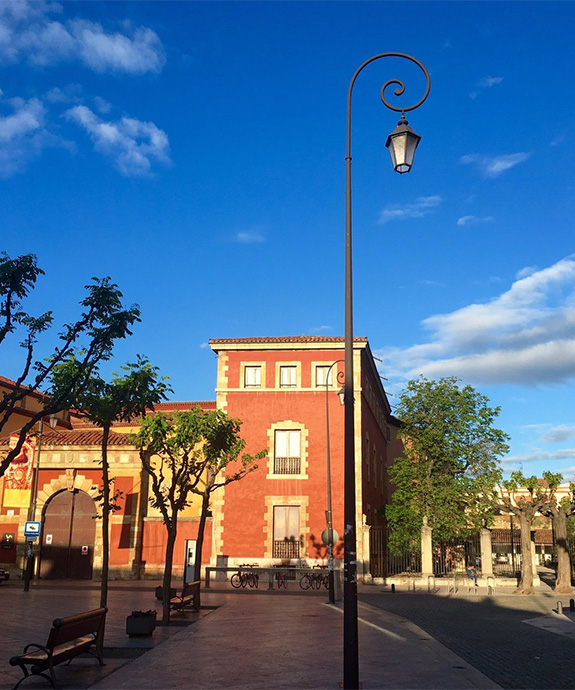 Located in the Barrio de Santa Marina, the plaza was given several names before the present one: San Froilán, Santisidro, Veterinaria and San Miguel. The first name came from the Hospital de San Froilán, founded in the 12th century under the responsibility of the monks of San Isidoro, which in the 16th century became the monastery of the Discalced Franciscans. After a fire in the 19th century, the Veterinary School was built in its place and remained there until 1932, when the Instituto Juan del Enzina occupied the space, now home to the Instituto Legio VII.

Next to the Instituto is another building that is representative of the plaza, the Iglesia de los Descalzos (church of the Discalced), built of brick with a Latin cross floor plan, which is now the Archivo Histórico Provincial.

Another notable building in the plaza is the one occupied by the monks of San Isidoro. A new monastery was built in the 16th century of only which the large Neo-Classical entrance remains.

Since 2019 the dominant feature of the plaza is the statue of king Alfonso IX. The lettering on the base says “In 1188 king Alfonso IX, lord of the Lands of Leon, Asturias, Galicia and Extremadura called for a Curia Real in which for the first time in history representatives of the people had a voice and vote in matters of the government of the region. In 2013 UNESCO declared the decrees enacted by these Courts the oldest document of the European parliamentary system. Alfonso IX granted rights, re-founded La Coruña and created the University of Salamanca in 1218”.