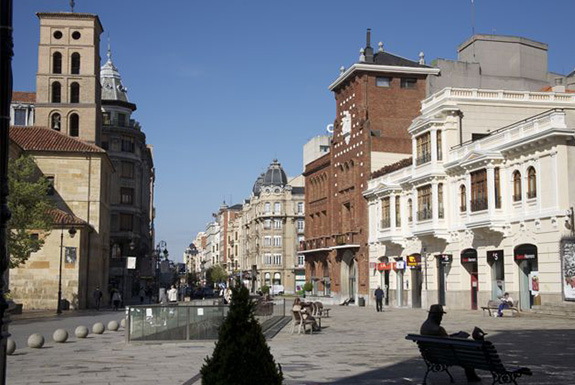 The Plaza de San Marcelo represents, along with the adjacent Plaza de Santo Domingo, the transition between the Old Quarter and the new Leon. The centre of the plaza still contains a small garden with a Neo-Classical fountain built in 1786. A large bronze model can also be seen here, made by Juan Carlos Ponga, showing the changes that have taken place in the city from Roman times to the present day.

The Hospital de San Antonio Abad was built in this area. The hospital was abandoned at the end of the 19th century and demolished between 1920 and 1930, partly to make way for the Calle de la Legión VII. Nothing remains of the hospital, but you can see the two building that were next to it: the Town Hall of Leon and the church of San Marcelo, both in the Classical Renaissance style and designed by Juan de Ribero Rada.

The Town Hall or la Poridad was built on the same place as the medieval building. Work commenced in 1584, and concluded four years later. Only the seven classical orders superimposed on the northern arches and the five on the east side belong to the Renaissance building, on the corner of the Calle de la Legión VII. The rest of the building was built in the 1960s. Luis Menéndez Pidal was commissioned as the project architect.

The building work of the church of San Marcelo took a lot longer, starting in 1588 and ending in 1628. San Marcelo was founded in the early 9th century and was restored in 1096.

Another building that deserves special mention is the Palacio de Torreblanca, whose name comes from its old owner, the Marqués de Torreblanca. Situated to the right of the Old Town Hall, the palace was built in 1672. It has served several functions over the course of time and is now the headquarters of the Nuevo Recreo Industrial.

Another interesting building is the Palacio de Hernando Villafañe, built in the 17th century by the alderman of the city, Hernando Villafañe. The ashlar stone facing is centre is notable, along with a large coat of arms with the cross of St Andrew and two crosses of. It is currently home to a fashion stores belonging to a large local company.

Palace of Los Guzmanes, built by Gil de Hontañón under commission from the bishop of Calahorra, Juan de Quiñones y Guzmán. The building was completed in 1571.

The Casa Botines is a modernist building originally designed as a commercial warehouse and private residence. Designed and built by the architect Antonio Gaudí between 1891 and 1892, it is one of the architect’s three works to be seen outside Catalonia, along with the Episcopal Palace of Astorga and the Capricho de Comillas in Cantabria.

The name Casa Botines comes from the surname of the company founder, Juan Homs y Botines, a Catalan businessman who settled in Leon. His partners Mariano Andrés González-Luna and Simón Fernández Fernández were responsible for commissioning Gaudí with the project. It is now home to the Gaudí Museum – Casa Botines.