Inicio What to see Monuments Cathedral of Leon 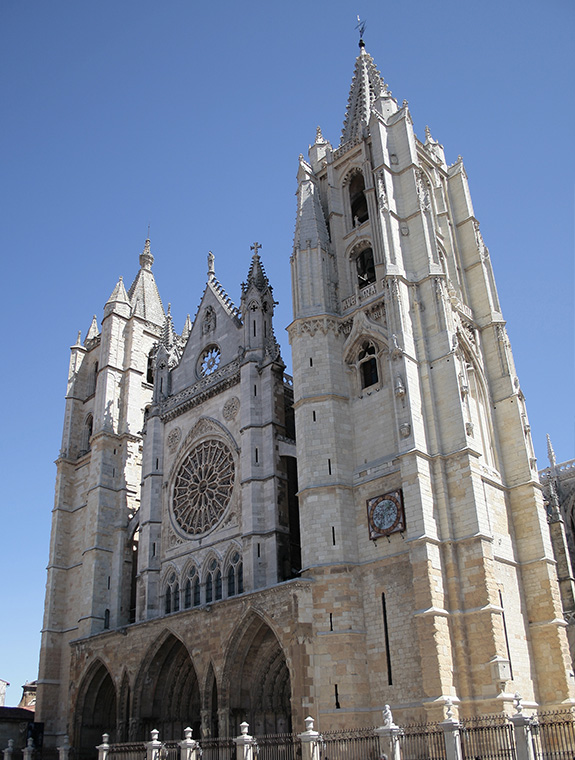 The cathedral was built on the site of the old Romanesque cathedral, the remains of the Palace of Ordoño II and the Roman baths. Building commenced in 1205. The cathedral is Gothic in style and draws its inspiration from the cathedral of Rheims, with a floor plan reduced from the original by 1/3.

A peculiar characteristic is that the towers appear to be separated from the central naves by flying buttresses. The cathedral is laid out in three naves that become five at the transept. The nave is closed off by a quadripartite rib vault. Vertical forces rest on pillars with fine columns and the exterior stresses are born by flying buttresses. It has an ambulatory with five semi-hexagonal naves at the end.

The cathedral has three facades with Gothic imagery.

The Door of the White Virgin, also called the Final Judgement: consists of two entrances, one with an image of the White Virgin on the mullion. The White Virgin (Nuestra Señora de las Nieves, Our Lady of the Snow, a popular patron on the Way of Saint James), replaces the figure of Christ in Majesty or Christ the Teacher. The tympanum shows the Final Judgement, presided over by Christ the Judge, images of St. John the Baptist, angels with symbols of the Passion, St. Michael weighing souls, etc.

The Door of St John shows scenes from the life of the Virgin and Jesus Christ: The Visitation, Nativity, Dream of St. Joseph, Annunciation, Adoration of the Magi. The jambs show images of St. Peter, St. John, David and Solomon, Locus Appellationis (place where the king sat to mete out justice), female image of Justice.

The Door of St Francis shows images of the Assumption of Mary, Coronation of Mary by the Eternal Father, the Wise and Foolish Virgins.

Door of St. Froilán: inspired by the Sacramental Door of the Cathedral of Burgos, it shows the Twelve Apostles presided over by Jesus Christ and an image of the Four Evangelists and St. Froilán, patron saint of the Diocese of Leon.

Door of the Virgen del Dado: has traces of the original paintwork, images of the Christ the King and the Four Evangelists, and the Visitation. 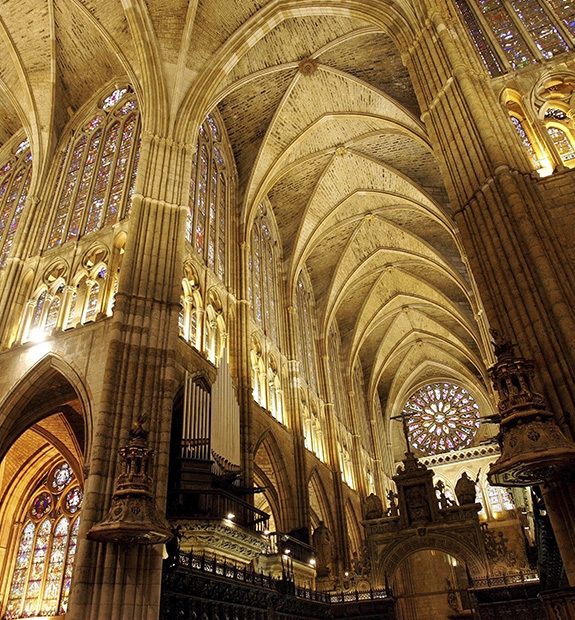 The Cathedral interior is a summation of medieval concepts and beliefs about the world, presided over by the Creator’s Blessing. The stained-glass windows are based on three conceptual levels:

Designed in the form of a triumphal arch and built in the 16th century. Subject: Birth of the Virgin Mary, Annunciation, Adoration of the Magi (Esteban Jordán), St. Peter and St. Paul, St. Marcellus and St. Isidor, image of the Annunciation in alabaster and of Christ Crucified, by Gaspar Becerra.

Built in the Gothic style in the 15th c. Designed and built by Jusquin van Utrech, Copin of Holland and Juan de Malinas.

Five large and two small panels, the work of Nicolás Francés, the Bishop’s Throne, 20 panels by the same artist, the Arca Repujada (1519), by Enrique de Arfe, and the Silver Tabernacle, by Rebollo.

The lighting of the Cathedral of Santa María has to be seen at night to really appreciate. The night lighting of the stained-glass windows (from 00:00 to 02:00, public holidays and weekends) gives you a new vision of the Pulchra Leonina, a real feast for the eyes.