One of the most traditional cultural events of the festivals of San Juan and San Pedro is the Romantic Route, which has been a constant feature of the festivals since 1971, although it goes back even further in time to 1949, when a “Literary Contest” or “Exaltation of Romantic Poetry” was organised. At this time, local groups of poets organised spontaneous literary competitions, contests or jousts that brought together local and national poets and writers. 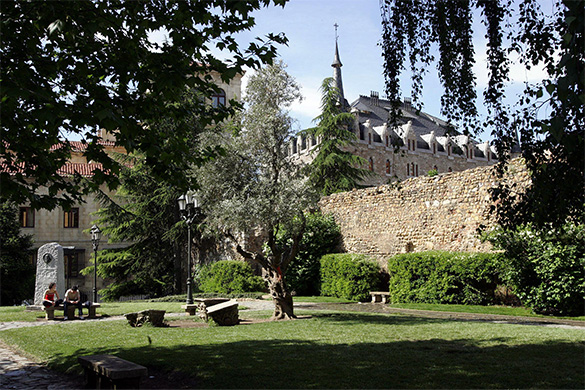 In 1949 a “Literary Contest” or “Exaltation of Romantic Poetry” was organised, which would provide a link with future local movements. The presence of the “Queen of the Festival” acts as a symbol of literature and of the woman as muse.

The atmosphere of the festival forms a backdrop for this event or route through the city at night, which has been given several names

The first recorded route was a one-off event in 1960, called a historical-literary journey. 1971 saw the first “lyrical journey of the city”, where prose writers and poets wrote about aspects of typical parts of the city. This was the starting point of a tradition that was to continue to the present day. The subjects chosen for are recorded although the event did not take place every year and sometimes records about the participants are lacking. Gates of the city, plazas, fountains, gardens, convents and, most frequently, the three most significant monuments have all been sources of inspiration Although there are repetitions in this sense, different aspects have been focused on. People with a wide range of tastes attended and participated in the event. People of all ages and all walks of life come together as lovers of poetry and literature along with other more infrequent visitors. The sources of inspiration and styles of the participants are many and varied, ranging from pure lyrical creations, to literary narration, legends, pure description, or the use of known or previously unknown historical sources about monuments, ways of life, etc.

The established time for the event at midnight on the 26th and usually after a concert is a rule established by custom. The event is something not to be missed by any local or visitor, an event that has formed part of the urban landscape and given it life in the form of literature and poetry. Miguel Bravo, with his work “Rincones Leoneses” (Leonese Corners) published in 1935, recorded in the memory of Leon a nostalgic vision of a city that he knew well, and that we now try to remember and reconstruct. The history of the city allows one to discover new aspects every day, elements that are sometimes unknown, or even forgotten, that can help historians and artists, or even just those who known about and love the past, to provide a new vision of an old Leon.