Inicio What to see Monuments PALACE OF CONDE LUNA 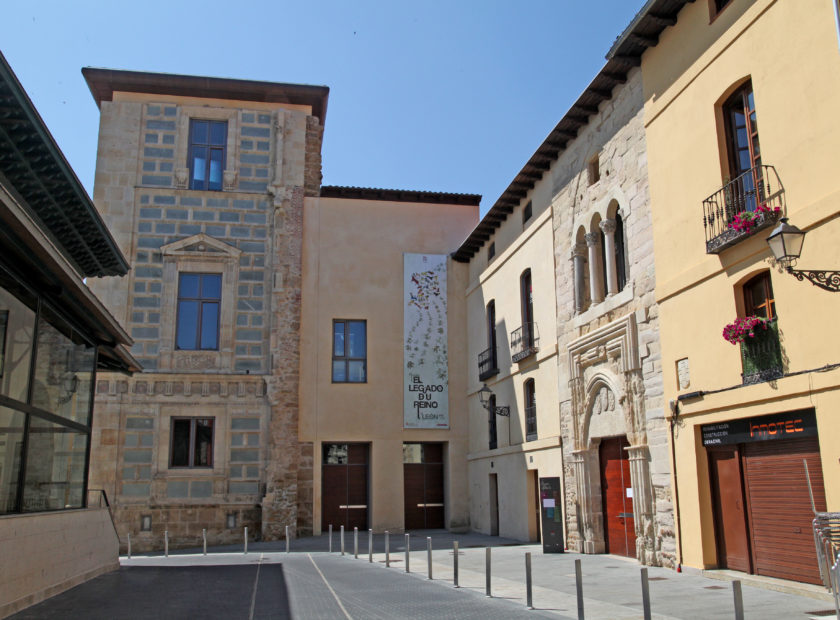 SITE OF CULTURAL INTEREST SINCE 1931

The Palace of the Condes de Luna occupies the space defined by the streets of La Rúa, Conde de Rebolledo and the Plaza del Conde, and occupies most of the south west part of the late Roman wall. It is situated in the heart of the old quarter, inside the secular parish of San Salvador de Palat de Rey, in a location that was the political centre of the medieval city. The building can be divided into three parts: the Gothic section, the Renaissance tower and the central area surrounded by both.

The notable feature of the medieval palace is the Gothic section on the north side. It has two floors and a facade divided into two levels. The lower level contains a door with lintel covered by a pointed arch, covered in turn by a Moorish double arch panel. The tympanum still has three coats of arms of the families who commissioned the building: Los Quiñones and Los Toledo.

The upper floor is illuminated by a window with three rounded arches supported on reused columns and capitals. Both floors have ceilings of carved woodwork that still have remnants of the original paintwork.

In the mid-16th. century, the fourth Conde de Luna, Claudio de Quiñones ordered a major refurbishment of the palace. The new building, which was never completed, includes the Renaissance tower situated to the south. The three floors are decorated with inverse bolstering. The ground floor, which has a window on the north side, is decorated with a classical entablature. The first floor has two large lintelled windows on the north and east side, framed by Ionic pilasters; below they have a parapet decorated with the coat of arms of the Quiñones, and are completed above with a triangular pediment. There are another two windows on the second floor above the ones on the first floor that are similar in design, although they lack the crowning pediment.
The central section is also part of the medieval palace, although it underwent major changes in the late 19th century, when doors were built into the ground floor along with windows in the upper floors.

There is a small patio in the space between the facade and the wall where there are several rooms, some of which still have ceiling of carved woodwork with polychromatic decoration.