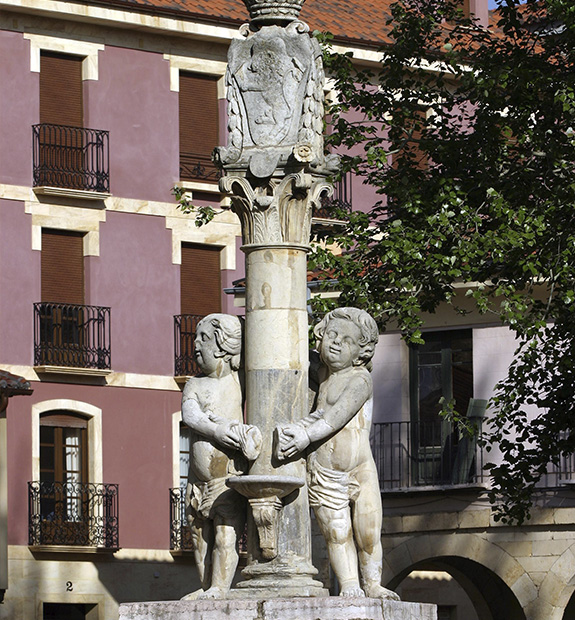 The style still maintains the traditional style of Leon, despite the indifference of those who show little concern for the past and it maintains its character despite the new buildings being constructed nearby.

The district is well known for its devotion to the Virgin Mary, the “Morenica del Mercado “, a name used for her on the Way of Saint James.

The Romanesque apses of the church where the Virgin is venerated look out onto the plaza, one of the most original and beautiful squares of the old city, and even more so at night.

The plaza was home to the grain market, while bread and other goods were also sold here. It was also the site for municipal proclamations about weights and measures, hunting and fishing, shoemakers and tanners, etc.

It was also used for bullfights. A famous one was held in 1663 to celebrate the rains brought by the Virgin.

At the foot of the cross members of the religious fraternity of Santa María sang the Salve “in sábato”. The Cruz de Piedra was regarded as the pillory of the city, and according to tradition is located on the exact place where the Virgin appeared one year on 9 February. The stone base was built in 1889.

The Fuente del Grano is opposite the apse of the church. It represents the confluence of the city of the rivers Bernesga and Torío.

The fountain consists of a square pedestal, with a column on top, with an Attic base and capital with acanthus leaves and bullrushes. At the top there are two coats of arms of the city. There are two children on each side of the column, with their arms behind their back and holding a lion’s mask that pours water into a basin, which is then sent to two conches.

The fountain was completed and put in place in 1769. The sculptor was Félix Cusac, assisted by a local artist, José Velasco.

At the foot of the cross the members of the Confraternity of St Mary used to sing the Salve in sabato. The stone cross was once the city pillory and marks the exact spot where the Virgin appeared one 9th of February. In 1889 the stone plinth was made.

The fountain set up opposite the apse of the church represents the confluence in the city of the rivers Bernesga and Torío.

It comprises a square plinth on which there stands a column with an Attic base and a capital with acanthus and bulrush leaves and two beautiful shields of the city on top. Joined to the column are two large statues of children holding a lion mask under their arms, crossed behind their backs. The lion pours forth water into a bowl, from which it goes to two shells.

The fountain was finished and set up in 1769. The sculptures were made by Félix Cusac, aided by the Leonese José Velasco.