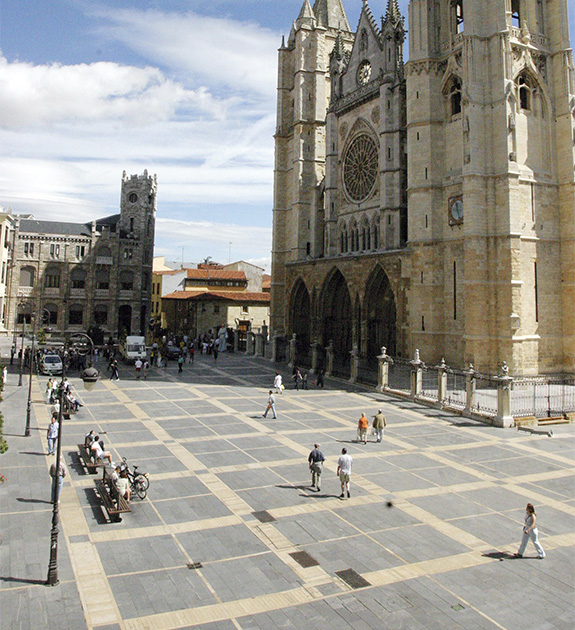 This plaza still keeps the name given to it in the 19th century. It was a small square in the Middle Ages until 1447, when it was extended up to its present limits. A broad open space was created that was used as market place or even for bullfights. It is also known as the Cathedral Square. As the name indicates, the plaza is home to the Cathedral and other buildings of interest such as the Old Post Office Building (now offices of the Provincial Government), designed by the architect Manuel de Cárdenas in 1911, the Seminario de San Froilán, a neo-Mudejar building designed by the architect Juan Bautista Lázaro in 1896 and the House-Museum of Sierra Pambley.

The plaza used to be home to the Neo-Classical statue of Neptune, which was later transferred to the Plaza Mayor and then to its current home in the park of San Francisco. The statue was replaced in 1927 by another fountain, decorated with beautiful tiling, created at the workshop of Viuda de Zuloaga e Hijos, and not by Daniel Zuloaga, who died in 1921. It was partly dismantled in 1944, along with the benches that accompanied it (now in the Residencia Virgen del Camino). However the fountain basin was covered by one of the flowerbeds that was being built up at the time, and the remains of the basin were recovered in 1996 during civil works carried out near the Cathedral.