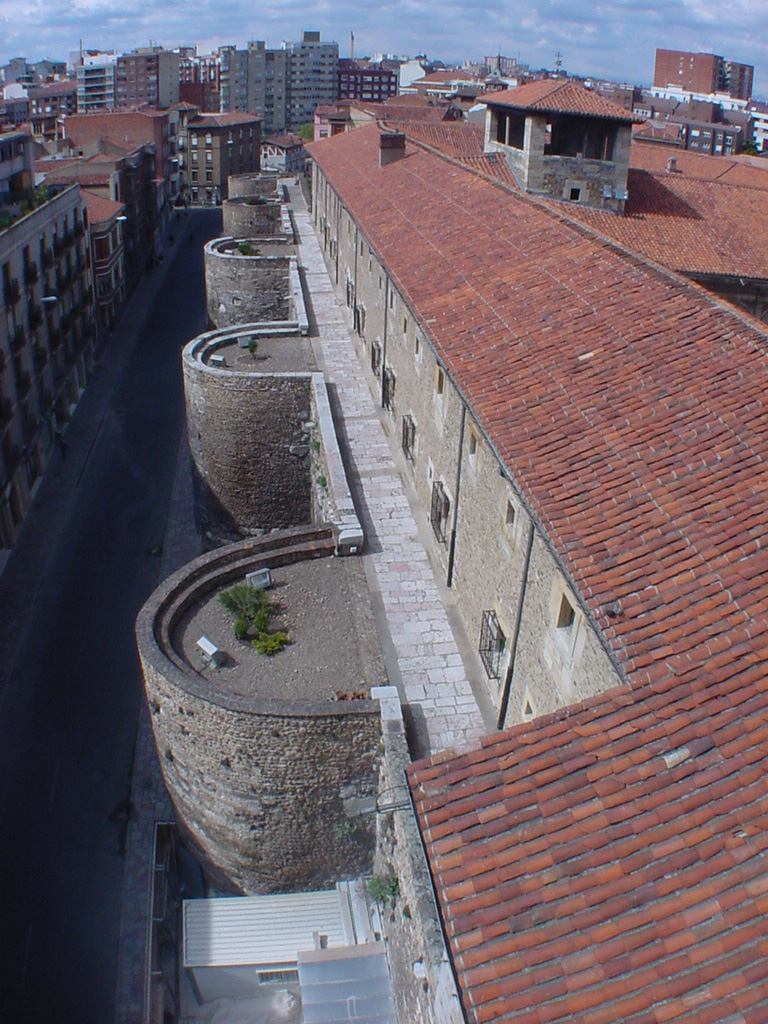 Visitors can still see parts of the Roman walls that surrounded the city in a rectangle surrounded by other buildings, although they were later deformed by restoration work carried out under Alfonso V and Alfonso IX, with new entrances into the city.

SITE OF CULTURAL INTEREST SINCE 1931

Although the camp built by the Legio VI victrix in Leon was well defended, the oldest stone walls were built at the end of the 1st c. CE by their successor, the VII Gemina. A small stretch of this wall can be seen on the steps from the Avenida de Ramón y Cajal to the Plaza de San Isidoro.

During the period of the late Roman empire, another stronger wall was built in front of the first one in the late 3rd century CE. It is over 5 m thick, about 8 m high and the sloping semi-circular towers, called buckets, were put in place at frequent intervals. This wall surrounded the same rectangular area, with one gate on each side. The history and many repairs made to the wall can be seen in the multitude of materials and techniques used, a good example of this is in the part near the Avenida Ramón y Cajal.

The only original gate that remains is on the north side of the wall, called the porta decumana in Roman times and then the Puerta Castillo in the Middle Ages because of the strongpoint built there on one of its sides. The present structure is a reconstruction built in the mid-18th c. that replaced the previous gate. In the same area, in Calle Carreras, you can see a long stretch of the Roman wall, although the towers were demolished in the late 19th century. However, the towers can still be seen in their complete form in the eastern section and all along the Avenida de los Cubos, although they were heightened in the 14th century.

The walls then disappear under the Cathedral, to reappear a little further on. Here you can see the foundations of the eastern gate, called the Puerta del Obispo, whose Gothic structures are still visible, while the remains of the Roman gate in the same place, the porta principalis sinistra, is conserved in an archaeological crypt built for that purpose.

The wall continues along the Calle Serradores up to the Torre de los Ponce, named after its 12th century owner. At this point the wall heads west, between the houses of the Plaza Mayor and the Barrio Húmedo, and is only visible in parts between the rooftops. The porta praetoria of the camp was located in this area; the gate was also called the Arco de Rege in the Middle Ages. The wall heads north at Calle de La Rúa until it reaches the Palacio de los Guzmanes, where a lot of the wall was lost as a result of the construction of the palace. The Puerta Cauriense would have been here, replacing the Roman porta principalis dextra. From this building onwards the wall goes along the Calle Ruiz de Salazar until it returns to the Avenida de Ramón y Cajal.