Our Lady of the Way

Inicio Our Lady of the Way 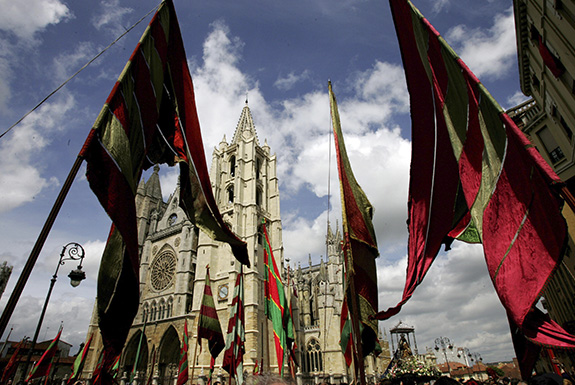 The people of Leon have felt tremendous devotion for this image ever since it first appeared. Prayers have been sent to the image in times of crisis such as plagues, major catastrophes or simply when the city wants to give thanks to the Virgin for the blessings it receives.

The first mention of the hermitage is in a document by the Chapter of the Cathedral in 1517, and the Town Hall of the city has maintained close links to the hermitage from the very beginning.

The city shows its devotion to the Virgin by bringing the image to the city. The event consists of a ceremony with its roots in the past to which small changes have been made in response to social changes.

The City Government of Leon has been present in issues relating to the sanctuary and the image since the beginning. In 1514, King Ferdinand granted the administration of the hermitage to the Cathedral Chapter and the Council. Years later in 1676 the municipal authorities of Leon acquired a permanent presence. The Brotherhood of the Sobarriba felt a special link to the image and in 1715 the statutes of the Brotherhood of the Virgen del Camino de la Sobarriba were written. The ceremony consists of a procession that carries the Virgin, informs the Government of Leon, which accepts the offering and appoints a committee made up of two councillors to arrange a date with the bishop.

When a date is agreed on, the town governments involved are informed, and on that same day two members of the City Government and two representatives of the Chapter appointed by the bishop go to the sanctuary, where they take out the image. Near the ancient well, they pass the image onto representatives of the town halls of Valdefresno, Villaturiel and Valverde, who bring it to the city, where it is handed over to the City Government of Leon, who take it the church of San Marcelo. It is received by the mayor, who places a bunch of flowers on it. It is then handed over to the Chapter of the Cathedral, who then carry it to the church, where religious ceremonies are carried out. After the novena or period agreed for the Virgin’s stay in Leon, the image is returned to its sanctuary using the same sequence in reverse.

Today the arrival of the Virgen del Camino in Leon is a pilgrimage in itself, with people coming from many parts of the city and province with crosses, banners and other religious symbols. It is taken out of the sanctuary by two city councillors and two members of the cathedral chapter accompanied by two Dominican friars, while outside the banners of Sobarriba and the village of the Virgin wait outside with the banner of the Sanctuary.