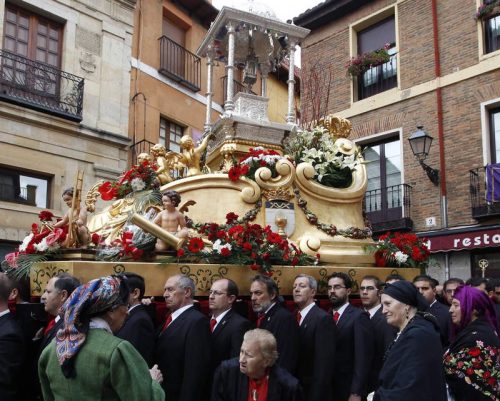 The Confraternity of the Holy Sacrament of the Minerva was established in the Real Monasterio de San Claudio de Leon in 1612, by its Abbot Vicente de Arce and seven other monks, to worship the Holy Sacrament of the Altar and as a member of the Minerva of Rome, founded in 1530 under the direction of the Dominican monk Tomás Stella, who placed it in the church of Santa María, built on the ruins of the Roman temple dedicated to the goddess Minerva. The Roman Minerva received the Papal bull “Dominicus Noster Jesus Christus”, promulgated in 1539, extending its application to all the Confraternities of the same nature.

Some years after it was founded, the Leonese confraternity practically disappeared, and was re-founded in 1637 by trader in the city of Leon, in particular by the members of the guilds of jewellers, handkerchief makers, ironworker and wax makers of the parish of San Martín. In January 1638, when Bartolomé Santos Risoba was bishop of Leon, the institution of the Minerva at the Monasterio de San Claudio was approved.

In May 1895, the bishop of the Diocese of Leon, Francisco Gómez-Salazar y Lucio Villega, approved the union of the Confraternities of the Minerva and the Holy Cross The festival of the Minerva Mayor disappeared and was replaced by the Infraoctava del Corpus, on the Sunday after Corpus Christi. This festival disappeared for several reasons in 1898; and would not reappear until 1937 when the Infraoctava del Corpus was re-established, giving rise to what is popularly known as the “Corpus Chico”, which continues today.

DATE OF THE EVENT