Inicio What to see DISTRICTS OF LEON Barrio Romántico 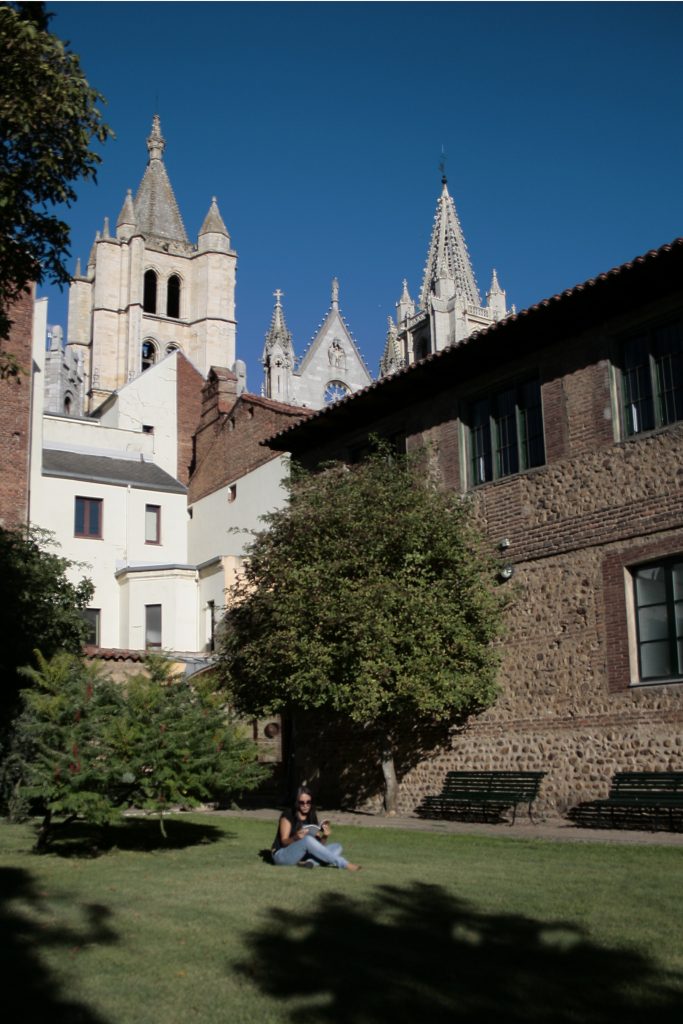 The iconic district of Leon, where a romantic ambience makes for a perfect backdrop for the wealth of heritage and history to be found there, combined with the very best in cuisine and accommodation, in a relaxed atmosphere without losing the commitment to providing distinction and quality. The Calle Cervantes, Plaza Torres de Omaña, calle del Cid…. form part of a district where the idea is to see and be seen.

To immerse yourself in the local colours, the best thing to do is to set off on foot from the Plaza de San Marcelo, one of the landmarks of Leon. What gives the plaza its majestic look is the Church of San Marcelo, dedicated to the Roman centurion who was martyred for being a Christian, the Palacio de Torreblanca, home to a recreation company and the Casa de la Poridad.

A testimony to the power of the city in the Renaissance, the Palace of Los Guzmanes was built in 1559 and since then has undergone many changes and restorations. Regarded as the most important civil monument in the city, with features such as its stairway. It has been home to the provincial government since 1882.

The Casa de Botines is a splendid visual poem designed by the talented Catalan architect, Antonio Gaudí. It was built in the last decade of the 19th century for the businessman Juan Homs y Botinás, from whom comes the unusual name for a building that is a feast for the imagination. The tremendous variety of urban architecture in Leon finds it greatest expression in the Plaza de Santo Domingo, surrounded by a ring of buildings of all shapes and sizes. One of them is the Pallarés, an old tool warehouse that is now the Museum of Leon. The collection includes more than 2,500 exhibits, with some remarkable pieces from the Roman and medieval periods.

The Calle del Cid is the central axis of the Barrio Romántico, an area where the pleasures of life are many and varied, and full of places to enjoy them. Oral traditions of the area claim that the area was home to the legendary knight, El Cid Campeador. Full of nooks and crannies, with a laid back atmosphere in the small and private park.

Besides the legends, the beauty of the Basilica of San Isidoro is something to behold. The church is a living expression of Romanesque art in Spain, a document in stone where the magical history of what was the Kingdom of Leon comes alive. The Royal Pantheon holds the remains of monarchs and other figures who created an empire.

But Leon has a lot more to offer. Nearby is the Puerta Castillo, the only remaining arch of the eleven original entrances to the city. Alongside, a symbol of nobility and greatness, the fortress that looked over the districts of the city. It was later used as a prison and now after a complete architectural make over, it is home to the Provincial Historical Archives, an archive full of documents on local life and customs through the ages.

The Fundación Vela Zanetti chose the centuries old Casona de Villapérez as a venue to show part of the work of the painter José Vela Zanetti, the creator of the mural in the UN building in New York. To complete our walk through the most magical part of Leon, a brief stop at the Church of Santa Marina, designed according to classical canons and founded by the Jesuits in 1571. Inside, the sculpture of the Virgen del Rosario, a beautiful work by Juan de Juni, is not to be missed.

On your way down the left hand side of the Calle Ancha, take the opportunity to see the Cathedral. 1,900 square metres of pure colour and light. Now you are in the Plaza de Regla, and ideal place to relax and take some time to see more of what we have to offer. An example is the Museum of Sierra Pambley, a home that recreates the social life and decorative trends of a 19th century middle class of the Spanish Enlightenment.

You can find the Roman baths on one side of the cathedral. A testimony to the refined customs of an empire that came, saw, conquered and built. Behind the cathedral are the walls, stones weathered by time that go back to the 3rd century, an ideal walk to work up an appetite and start all over again.