CRYPT OF THE BISHOP’S GATE

Inicio What to see Monuments CRYPT OF THE BISHOP’S GATE 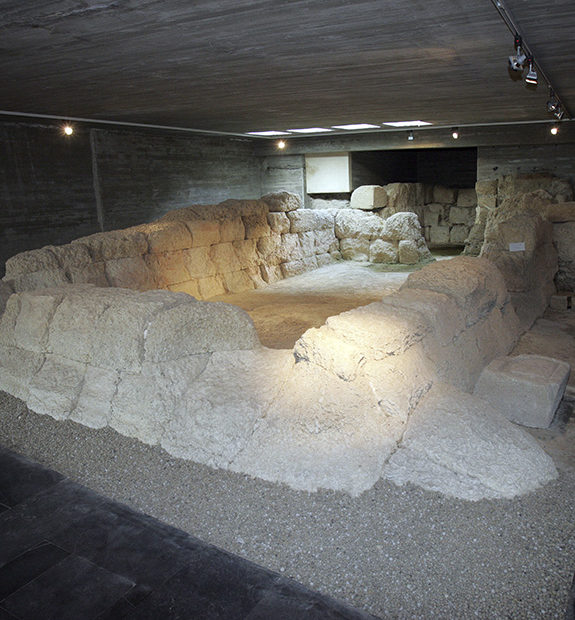 The crypt, situated to the south of the Cathedral, is home to the remains found during the archaeological rescue digs of 1986 during the building work done to pedestrianize the area.

The crypt contains the remains of the Porta Principalis Sinistra of the camp of the Legio VII Gemina along with remains of the latrines of the magnificent Roman bath house.

THE PORTA PRINCIPALIS SINISTRA OF THE LEGIO VII GEMINA

This gate was a large construction used for entry into the camp of the Legio VII Gemina from the east. The gate consisted a large double door, flanked by two rectangular towers, 12.8 m long and 5 m wide on the outside. Only the north side is visible in the crypt, the other side was fully documented during the dig, but is now under the street. Entry was via two passages with Roman arches and covered with domed ceilings, of 4 m height, open at both ends, which were closed with two large wooden doors on the exterior.

The first remains of this building, “a magnificent edifice built by pagans in times past for their comfort and the use of baths and warm waters”, according to the Augustinian cleric M. Risco, were discovered in the mid-19th century under the Cathedral during restoration work. It is currently believed that the baths occupied an area larger than the cathedral building, and went as far as the Plaza de la Regla, where remains of large heated areas were found. These rooms were heated by means of an air chamber under the floor through which hot air passed (hypocaustum).

Bridge of April 23 (Day of the Community of Castilla y León):